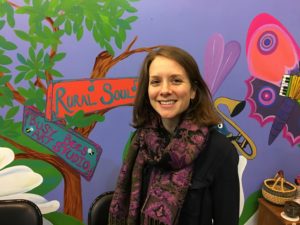 Artist and gallery owner Erik Laffer was born on Long Island, raised in Washington County and schooled in Albany, after which he traveled the country selling his cartography paintings. In June 2012, he opened his gallery in Schuylerville to collaborate and represent other artists. The biggest draw of the historic village was its affordability.

“I learned framing and the representation of other artists. It was amazing to learn how much talent there is. That’s what triggered the idea of having a gallery filled with the works of other artists,” he said.

Five years in, Laffer draws a majority of collectors from a 100-mile radius of the historic village who spend, on average, between $1,400 and $1,800 on a piece of artwork.

He currently represents more than 50 artists, and showcases several works from each artist. New works are placed on exhibit in the gallery main space every four to six weeks, while the rear part of the gallery displays the works of artists who have previously been shown.

Laffer’s goals include increasing the roster of artists he represents as well as opening a sister location and becoming more involved in art consulting. His recent collaboration with Saratoga Hospital which resulted in the hospital’s ICU unit being fitted with the works of artists Laffer represents.

“Connecting artists and collectors, I’m proud of that. The most gratifying thing I do is writing a check to an artist and seeing their work go to someone’s home,” Laffer said. 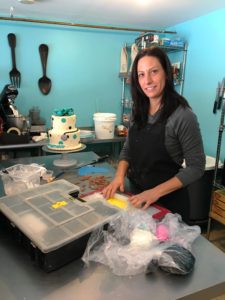 Alissa Woods worked as an executive recruiter for six years at a Boston, Massachusetts technology firm. “I was bored to tears, so I started taking some cooking classes on the side,” she said, standing behind the counter of her commercial kitchen on Broad Street and fixing an edible stethoscope onto a cake she was creating for a nurse.

Those early cooking classes led to a year-long bakery course and an internship at Putnam Market in Saratoga Springs, where she eventually graduated to the position of executive pastry chef. Woods started her business, Cake By Alissa, out of her Schuylerville home in 2011 and by November 2015, she set up shop on Broad Street. Her menu features more than a dozen cake, frosting and filling combinations, and she offers a bounty of options for special occasions. Putting together the pieces of a person’s life is a combination of creativity and research, said Woods, who also holds a degree in psychology from the University of New Hampshire. Since opening, she has hired two part-time employees to help with the work load.

“I call this my work shop. I’m open by appointment and it’s been working out great,” Woods said. One key is using high-quality ingredients. “There are things that you just can’t skimp on,” she said. The other is having a tight focus and being good at what you do. “It is a specialty, but I think doing one thing very, very well is what makes it successful.”

Taking cooking classes can lead you somewhere you didn’t realize you’d end up, it has a wealth of benefits for personal and professional use! So if you want to try it out, then why not do that? There are cooking classes boston that are available for people to try out, or if you are looking for somewhere closer to home, you can check out the website cocusocial.com to see what they have to offer.