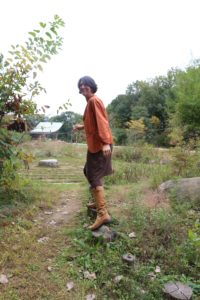 Hudson Crossing Park centers around Champlain Canal Lock 5 Island, just north of the village of Schuylerville. It is a bi-county park where history, geology and environmental conscience meet, and where partnerships and grants from both public and private channels have ushered in the development of public trails and structures.

Cindy Wian first became involved with Hudson Crossing Park – “this underutilized and neglected piece of state land,” she says — a decade ago. In 2016, she was named the park director.

The initial work on Hudson Crossing Park began around 2000 when a grassroots steering committee was formed by volunteers, planners, school leaders and elected officials from Saratoga and Washington counties. Professionals with experience in surveying and creating architectural concept drawings donated their talents, artists were brought in to create interpretive signage, and in 2006, the park was incorporated as an educational corporation in the state of New York. Subsequently it received recognition as a not-for-profit entity.

“A lot of what happened in the park only happened in the uniquely beautiful way it did because artists were involved in the way things were created,” Wian says. “Sometimes things were donated, but most of the time they were hired through grant funding, so there is an economic piece to it. Partnerships have always been what we do, and that is what makes us succeed.”

The park, open dawn to dusk daily, houses sculptures assembled from natural materials, found objects and recycled metals, designed to draw visitors deeper into the park. The park hosts two miles of trails, a play garden, a picnic pavilion and floating dock. A park ranger from Saratoga National Historical Park comes in to offer lessons about local and migrating birds, and interpretive signs and audio tour mates tell the story of the park and its environment all along the riverwalk sensory trail. These talks are so educational, especially for children who seem to just love them! They tend to interact very confidently with the ranger, even asking to wear his ranger hat sometimes! Plans are in the works for expansion into Washington County on the site of the former Adirondack School, which would provide east-of-the-Hudson River access to classrooms and administrative offices, as well as a year-round facility (itself benefiting the local economy through job creation).

“We’re building on history, the environment and the arts as components to be woven into – whether it’s with interpretive displays, or programming, whether it’s event-based, or with workshops and trainings,” Wian says. “All of these things have been in the mix and the consensus is creating the programming and the physical spaces to make this a destination.”