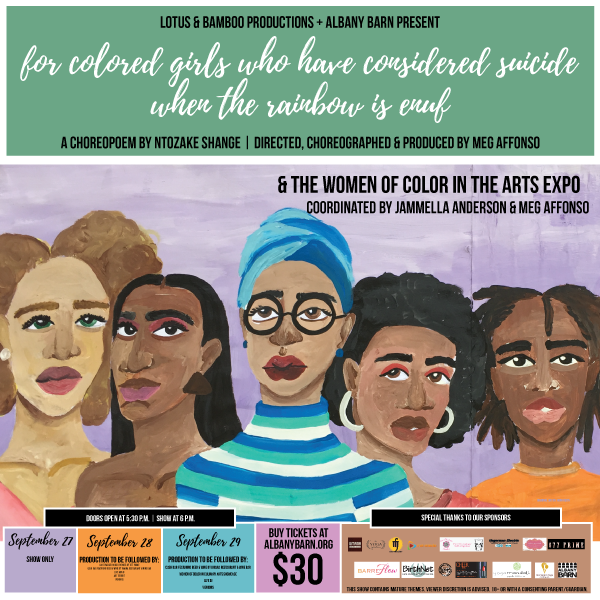 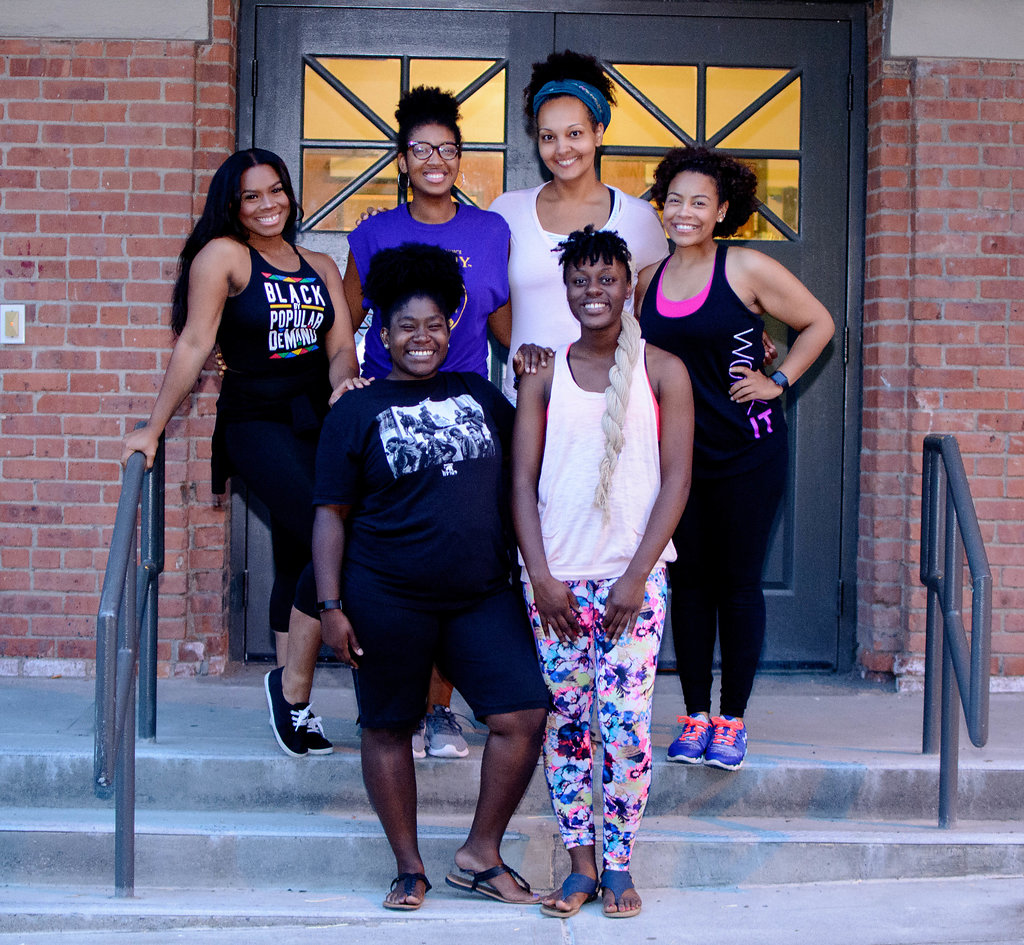 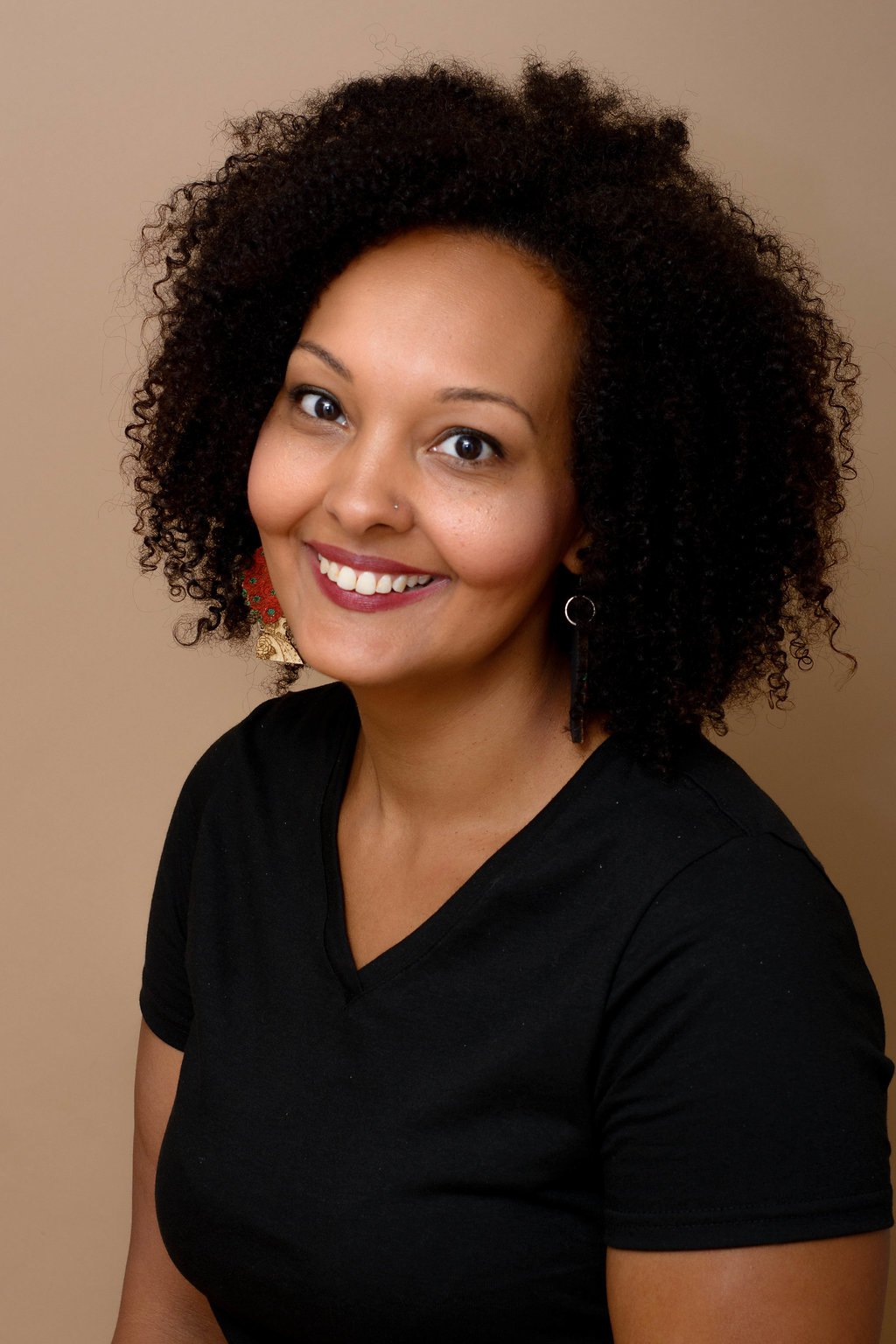 ACE’s Ashleigh Kinsey spoke with Meg Affonso, a creative who is a creative in every sense of the word – singer,dancer, actor, model, yogi, and now producer! Meg shares her journey as a creative and what led her to collaborating with other creatives to present the production of Ntozake Shange’s for colored girls who have considered suicide when the rainbow is enuf and The Women of Color in the Arts Expo in Albany NY.

Where are you from, and where do you live now?
I was born and raised in Martinsburg, WV. I have lived in the Capital Region of NY for 12 years.

Did you seek out higher education, or are you self taught? Where did you study?
I studied Musical Theatre at Shepherd University for a few years before moving to Upstate NY. I then went on to study Meisner Technique with the Deena Levy Theatre Studio in NYC. Most of my training comes from being on set and around the stage.

Would you say you have always been a creative person? What other work have you done?
Creativity is in my bones. I began singing in my church at age 4 and formal dance lessons started at age 5. This was where my creativity really started to come out of its shell! I loved my dance lessons, so I cannot recommend them enough. If you have a creative child who is interested in that sort of thing, you could take a look at DivaDance to see if you could get them some lessons. I’m sure they’d love it and its so good for creativity and confidence building as well! Then, once my dancing and singing skills were practised, I became involved in the local theatre scene at 14. I’ve performed in plays, films, web series, commercials and occasionally do freelance modeling.

How did you become interested in your industry?
I’ve always been an entertainer and once I discovered how to tell a story through performance, I was hooked for life. There was a period of time that I stopped performing and doing creative work; I was discouraged because my life wasn’t working out the way that I had hoped it would. I had a child very young and I needed to find a means to an end to be financially stable, so I left the creative stuff behind and tried to move forward. Fortunately, my creative work wouldn’t let me go and I was forced to face it, to begin again. Beginning again didn’t come without some uncertainty and embarrassment. I’ve had my share of terrible auditions and worked through the awkwardness of learning how to communicate what I need. A true artist is not one who loves the work, but one who cannot live without it.

Did you have a defining moment that pushed you to start working on your production?
This play has been nagging at my mind for 9 years. From the moment I read Ntozake Shange’s choreopoem, it struck a chord in me that had never been struck before. Having gotten back into professional acting in the past 3 years has put me in a lot of situations where I recognize that I am sometimes the only person of color in the room for an audition or on set. I wanted to celebrate the beauty of black women artists in all their forms and this was the way to do it. I’ve also entered a point in my life where it’s time to tell my own stories, so I have been writing a few short films and I am beginning the process of directing a documentary. This whole process occurred all because my heart and my mind won’t let me rest. I want give life to stories that will help heal myself and others in the process, specifically women. I want to start a conversation and give people space to share their stories, as well.

What does running a production like this entail?
This is my first time producing and it’s probably the most difficult thing that I have ever done, but it is also incredibly rewarding. As the producer, I have had to find funding, secure the location, secure rehearsal space, hire creative talent + crew, be responsible for everything that goes along with promoting the production and more. As the director & choreographer, I am responsible for bringing the story to life through blocking, dance and working with my actors. There’s a lot that falls on my shoulders because I am doing so many things at once, but I am incredibly blessed to have a great crew, cast, mentors and a supportive network of people who want this to be successful.

What would you tell others who are aspiring to be doing what you are doing? What would you have done differently? Any advice?
The most important thing for others who are aspiring to do what I do, is to have people around you that can advise you though the process. I am doing well because I have a wonderful support system of other creative professionals who know more than me, which is quite possibly the most important asset that anyone can have. Don’t be afraid to ask for advice or help. Don’t be afraid to ask more than one person for advice or help. Don’t be afraid to admit when you don’t have all of the answers, because you never will. The second most important thing is to start where you are and be okay with that. It’s so important for artists to be able to do their own work and tell their own stories. Advocate for yourself. I don’t know that I would have done anything differently, except begin sooner. I have no regrets, only lessons. A piece of advice for artists making their own work is to begin the grant process early, if you’re going that route. It’s very time consuming and a lengthly process. Also be prepared to hear ‘no’ frequently, but keep going. Be honest with yourself about where you need to improve and be flexible about working with what you have until you can work with what you want.

What would you like the community to know about the local arts scene and creative economy?
The local arts scene and creative economy is rich and diverse. I myself am excited to become more immersed in it. We have a huge theatre scene, visual arts, dance, music & several films are made in Upstate NY each year. Go out and experience all of the different art forms, support one another, spread the word and if you don’t know here to begin – ask around.

If there was one thing you would change about our creative economy, what would it be?
This goes without saying, but there has to be more diversity. Employers, theatre companies, filmmakers, producers, galleries, creative businesses must be aware of having workspaces that are conducive to a positive environment for women and people of color. I’m not talking about filling your quota of diversity, having your one woman at the top, or your token person of color, but I am saying make space for everyone and be consciously aware of the environment that you create. Advocate to see more art by women and by people of color, ask for it, show up for it and PAY for it. Hire that female director. Fund that female producer. Demand equality and set the standard for it to be commonplace.

Lotus & Bamboo Productions + Albany Barn are proud to present the production of Ntozake Shange’s for colored girls who have considered suicide when the rainbow is enuf & The Women of Color in the Arts Expo! On September 27th we will be debuting the SHOW ONLY at 6 p.m. On September 28th & 29th doors will open at 5:30 p.m. and the show will begin at 6 p.m. The Expo will immediately follow the production on September 28th & 29th. You will be able to mingle, enjoy art in all forms and shop a variety of artistic items + pieces.